Good Morning! It’s Friday!! TGIF! 😀 Yay for the weekend and a little extra sleep. I sure do need it.

Ready to see some pictures from Nassau? This was our last port we stopped at on the cruise and while it wasn’t the best one it was by far the most interesting one. If you want to see pictures from the first two ports you can go here and here. 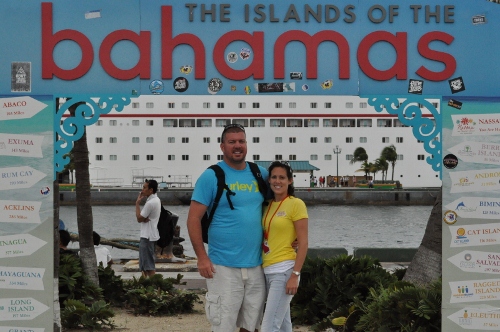 At this port we decided not to do any excursions or go see Atlantis – which everyone was doing/talking about. Instead, we wanted to explore the island and learn about the culture.

I’ll say, I expected Nassau to be a lot nicer than it was. It was actually quite dirty and run down. Most of the buildings didn’t seem to be kept up and were falling apart. The houses were very small and falling apart as well. While the streets weren’t littered with a ton of trash you still just felt like the place was very dirty. So that came as quite the shock because I expected it to be completely different.

One thing I did love..seeing the horse drawn carriages. Now mind you, most of the horses looked under weight and like they needed some time off but once I got passed that it was neat to see all the different horses pulling unique carriages. They were very broke and extremely calm for all the caos and crazy fast drivers. People sure didn’t slow down when driving around there. 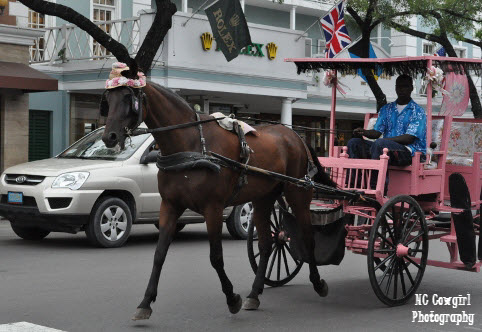 As we walked further into the city, we noticed this very long stair case at the end of a back road. Me being me had to check it out and headed down this creepy back road – luckily Tory and Braxton followed so I wasn’t alone. As we climbed the stairs we came across these neat statues made of wood. Each one represented a different lady or child. None of them had a face yet, each one still had such a presence about them. 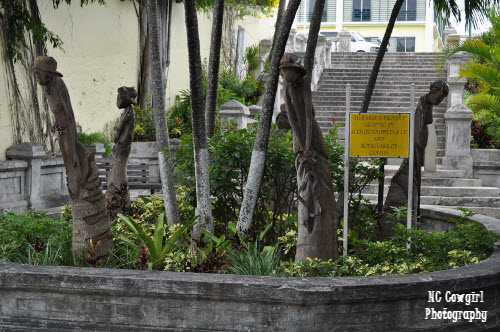 We also stopped at the Straw Market and looked around at all the jewelry and Souvenirs the local women there were selling. The jewelry was really neat and priced reasonably. However, a lot of the souvenirs were made from wood and let’s just say I didn’t bring anything home. I might have also offended one woman because she tried to sell me a horse carved from wood for $25 and I told her I would only pay $5. I mean this thing was only as big as my hand and there was nothing special about it other then it said Bahamas on it. Was that wrong of me?? Maybe I should have just said no thanks and kept walking..oh well. :/ 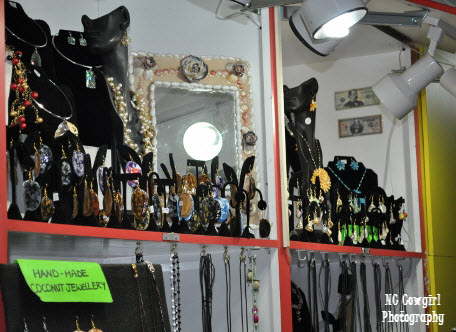 This statue of a naked woman and her children handing from a sheet was a hidden gem we found. We came across this as we walked down a side road. The road didn’t look to be anything special and probably in the wrong part of town – if I had to guess- but we went any way and who knew we’d find this. The picture really doesn’t do it justice either. This statue was the centerpiece for a small garden that was hidden in between buildings and through a gated walk way. 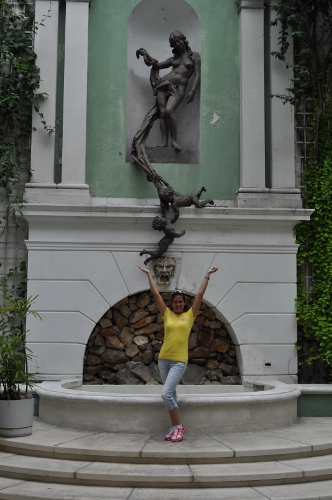 During our journey through the city we came across these two fellas. They were nice enough to take a picture with me. Notice the guy on the right is smiling and the one on the left isn’t..what’s up with that?! He should have felt honored to get a picture with me..just kidding. 😉 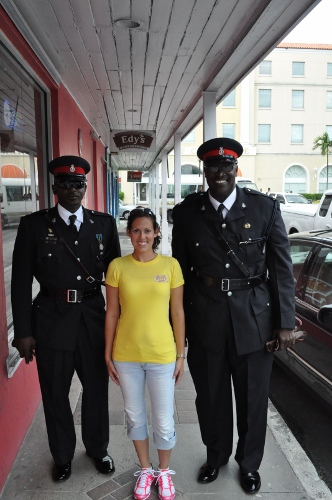 Anyway, onto the best part (In my opinion of course). While walking around Nassau we came up on a funeral that was beginning and it looked to be for someone important. There were police blocking off the streets, many limos, people in suits, news crews, and these guys below with their animal coverings. It almost seemed like  a movie scene. 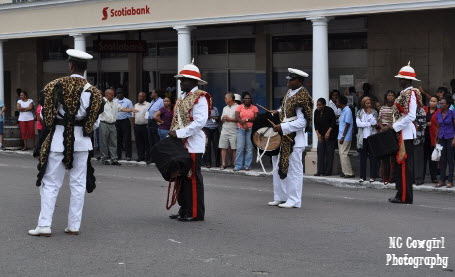 Here is the casket being loaded on to a trailer pulled behind a jeep. While at the funeral I talked to a local woman who walked me through what was happening. The person that was laid to rest was Chairman Charles Maynard. He was only 42 and died from a Massive Heart Attack. Very sad. 🙁 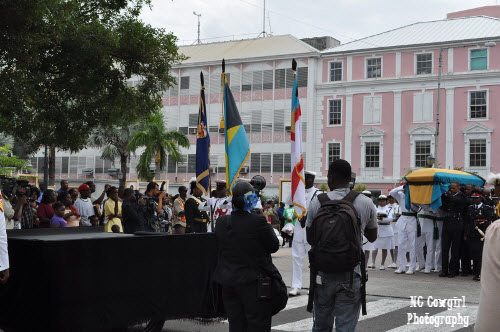 I’m not a fan of funerals – I’m sure you’re not either – but I will say I’m glad I got to experience this one and that the locals were ok with all these strangers from the cruise ships attending it as well. I love seeing and being a part of other cultures and to see this funeral first hand was very neat.

That’s a wrap for now! Stay tuned tomorrow for some awesome cruise tips! You won’t want to miss out on these because they will save you $$ and time. 😉

Everything Happens For a Reason…

When You Get Bucked Off… 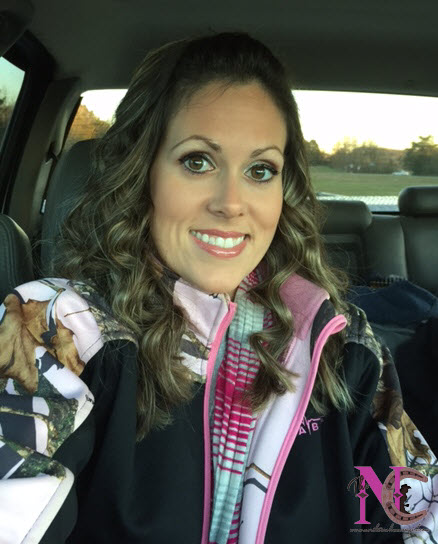 Hey Cowgirl! You are Beautiful just the way you are!