Could it be Miracle Horse Feed?

Remember back when I went on this trail ride and Jet sweat on his own? For the past 4 years or so Jet has had a disease called Anhidrosis. In short, this disease causes him to over heat and not sweat during hotter months.

He can be out in the pasture and doing nothing and will be panting heavily and feel hot to the touch. So in summer I have to be extra cautious with him and keep him in shade and cool.

At my old farm I could keep him in a stall with a fan on him but at my new place that’s not possible. This summer was extra hard on him because it got hot so many days. So I spend most afternoons hosing him off until he was cooled down. That could take anywhere from 10-20 mins depending on how hot he was.

One day I came home to him with a bloody nose and let me tell you..I was freaked out! So my vet recommended putting him on One AC during summer time and seeing if that would help him sweat. While it did some, it still wasn’t enough to keep him from overheating. It’s a great product don’t get me wrong and if the problem comes back this summer, I will go back to using it; but, I think I found a better solution. See I’ve tried it all, I’ve tried Guinness Beer in his feed..it didn’t work. (I was drinking cheap beer (Busch light) while he was getting the expensive stuff. Now if that doesn’t tell you how much I love my horse nothing will!)

This year I was introduced to a new horse feed by a friend. He has fed it to his horse for years and his horse has always looked so great. His coat was shinny, his feet so nice, his weight just perfect, and so I figured why not give it a try. I had been feeding the same feed for over 6 years and liked it, mainly because it was cheaper, but I figured I could spend a little more on this horse feed if I didn’t have to feed as much. In my mind I figured it would even out but boy I had no idea it would be a miracle feed! What feed is it your wondering. It’s Purina’s Strategy Healthy Edge Horse Feed. 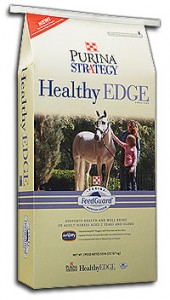 I’m telling you this feed is well worth the price. I say that now, if it continues to go up I might only be able to afford to feed it to one horse, lol.

THE DIFFERENCE IT HAS MADE

I’ve really seen a big difference since I started feeding it. My horses are putting the weight back on they had dropped, Jet is sweating on his own (Just pulled his blanket off today and underneath he had been sweating, yay! Not yay because it was too hot for him to have on but yay because it’s so nice to see sweat) and not only is he sweating but after a month of him being on the feed his Fistulous Whithers cleared up. 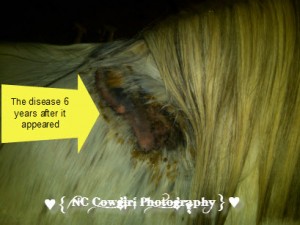 While the Fistulous Withers is not life threatening, like the over heating was, this is a HUGE thing. He’s had remnants of that disease for 6 years now. The vet thought he was going to need to be put down because the disease kept coming back and never completely healed. For 6 YEARS, I’ve had to be careful with his open sore and to make sure I kept it clean. One day I went out to the barn and noticed it was closed up and healed. Like holy crap!

While my vet doesn’t think there is any correlation, I have to say I disagree strongly. This horse feed is the ONLY thing I’ve changed in all those years. There just isn’t anything else to explain it. So for now, I’ll keep thinking this feed is the miracle and continue to feed it.

Do you know of anyone with a horse with either of these diseases? Have they had any luck with anything they have tried? Puh-Puh please share 🙂

Hopes for a Greener Pasture