A Much Needed Adjustment for Rumor

Remember the other day when I said I thought Rumor had some major issues going on such as a shifted rib cage and sternum and then possible some ribs out of place. Welp, I was right. Boy was she ever messed up too.

So the Chiro came on Tuesday like planned and worked on both Gracie and Rumor. Both of which had similar issues going on plus Gracie needed her leg adjusted since it was locking up again. So let me start with Rumor first since she was the biggest concern this time. Sadly, I failed to get good pictures since I was using my phone and I was so into what was happening with Rumor that I failed to get pictures of her. Luckily, I do have some pictures of Gracie which will help give you an idea of what Rumor looked like as well.

Right away, my chiro saw problems with her back and said her rib cage was shifted. I had to know how she knew without touching her and asked her to point everything out to me. First thing, her top line was concaved on one side. Next we got her squared up and then stood straight in front of her. Looking straight at her, you could see that her right side was more round at the bottom of the rib cage and flat at the top. Her left side was barely visible and not near as round. Next, we looked at her sternum which when it’s lined up the muscle in between her front legs would be symmetrical. She was not. Her sternum appeared to be shifted left. So if you can visualize this, her rib cage went one way and her sternum the other. Ouch.  Along with just seeing the visual signs, she also showed me how to feel for the shift in the sternum. To do that, you place your palm parallel to the inside leg and then push upwards into what is like the arm pit. You feel on both sides to see which side is tight and which side is loose or do they feel even. As you can imagine, normal is an even feeling. If it’s tight then that means the sternum has shifted in that direction. 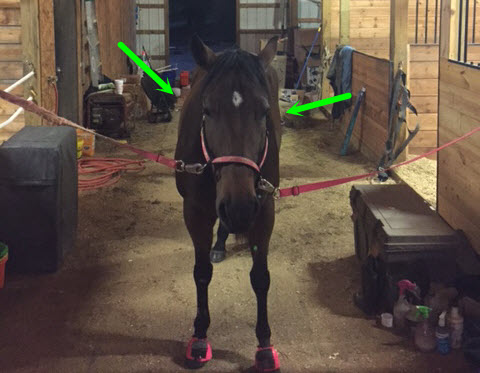 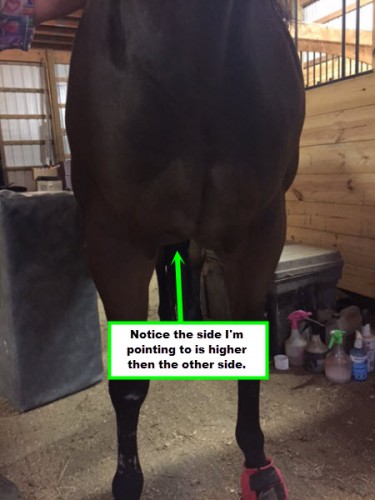 After we got both of those fixed, she had to massage the cartilage around the sternum to smooth it back out. Then she moved on to the ribs. This next part I have no idea how to explain. Because of her rib cage being shifted, her ribs had a lot more pressure on them which pushed them down and locked them in place. If you’re like me then you probably are thinking aren’t they supposed to be locked in place.  Shockingly the answer is no. There should be a little give when you push on them. Rumors weren’t giving at all. So she had to work on each one and immediately we started to see a difference. Not only was she rounding out but her top line was starting to raise back up again. Rumor was in heaven too, dropping her head down and stretching out and tons of licking. Now, instead of their being a slight dip in her back, she now was looking more level and round. Normal. Not to mention, at the beginning of the visit she wouldn’t stand still and didn’t want to be touched. By the end she was totally relaxed and begging for Donna to keep going. 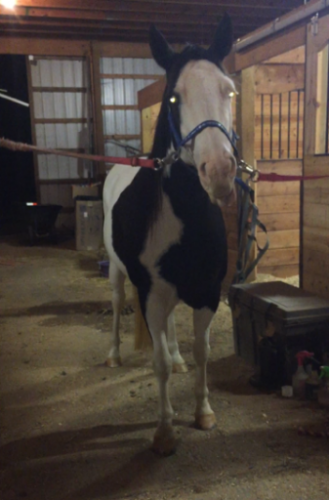 Those areas were the worst for her. She did have a few places in her neck that needed adjusting but nothing out of the ordinary. So needless to say, this chiro vist was well overdue and my suspicions of something being off with Rumor were dead on. I just had no idea she was in that bad of shape.  I honestly felt awful when I realized just how much was wrong with her. I now am 100% confident that when my gut tells me something is not right, I need to listen to it and stop second guessing myself. I’ve been right more times than I’ve been wrong which should be a good enough sign.

Anyway, on to Gracie who has basically had the last year off because I can’t find enough time in the day to ride two horses when I get home from work. This in itself causes her problems. If I want to keep her from locking up, I need to be riding her every day and building her muscles up. However, this isn’t possible for me and what I’ve learned is that if I ride her a few days and then stop for a week or more and then ride her again, it makes the problem worse than if I just leave her be. So she has had a lot of time off with periodic easy rides here and there. Well about this time every year is when she has most of the problems. I don’t know if it’s because of the weather or a change in the grass but Fall and early winter are when she needs Donna to adjust her more than any other time of the year. I’m not going to go into great detail with Gracie since it’s mostly the same for her but I do want to point out a few notable things for anyone who follows Gracie’s story because you have a horse with the same issue. (1) when Gracie’s leg locks up you can look at it and tell that it is out of whack. The toe is always pointing outwards more so then normal which is a sign of her Tibia being twisted. Once this is adjusted, along with her hip, she stops locking up and (2) When she starts to show signs of weakness in her hind end, I know things are shifting around and an adjustment is needed. If we are able to adjust her quickly after seeing this, it keeps her leg from locking up. However, if we can’t get her adjusted soon enough then her leg is always next to lock up.

So if you have a horse with a locking stifle, look to see if your horse is the same way. Is there signs of hind end weakness? Does the leg look twisted? If so, call a Chiro and tell them to check the hip joint, SI Joint and tibia.

If there is one thing I have learned over the past 4 years of working with Donna, it’s that all horses can benefit from a chiro visit and the change is immediate. It truly is amazing to see how a horse’s body and mind go from being so tense and out of whack to relaxed and peaceful. I would urge anyway, don’t wait until your horse shows signs of a problem.  Have a Chiro out to do a routine check on your horse to make sure everything is in alignment. Prevention is better than reaction and a lot less costly! Plus your horse stays happy and strong. 🙂 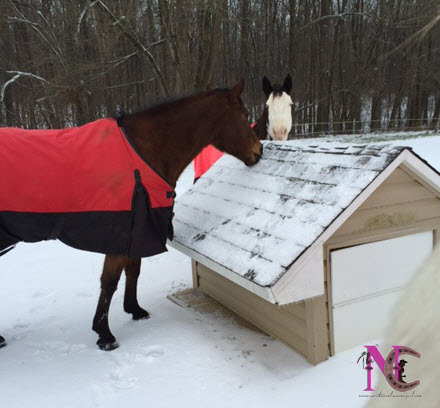 Will a Massage Really help my Horse?